Last Saturday we had quite the adventure over here.

And after allowing a week for wound and ahem, pride, to heal I present to you: Last Saturday Night.

It started off as a normal Saturday evening. I was catching up on the latest episode of Castle (you know, the important things in life…) when my dearest hubby decided he was hungry. A recent trip to a bagel shop had filled our freezer with some rather tasty bagels, which sounded quite good to the hungry husband.

I knew we were in for an adventure when I heard a very loud silence from the kitchen, followed by “um. Caitlin?” Thankfully my future mothering skills kicked in and I headed straight for the First Aid kit (which of course was MIA…). Apparently, the hubby decided to cut his hand instead of the (still frozen) bagel.

So I loaded him and his bleeding hand in the car and we headed to the emergency room:

Where they gave him a better band-aid then I had mustered up (so maybe the first thing I could reach was a paper towel…don’t judge me, it did its job).

And then we had to endure emergency room time. So we waited:

And said patient was slightly less then thrilled with my need to document the entire adventure.

But finally they came to wash out the wound and stitch him up: 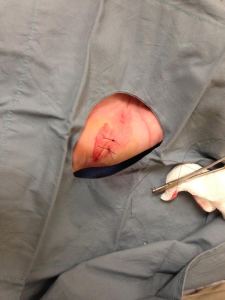 It was a painful experience for everyone, but four stitches later everyone was alive and (mostly) together. Although he who received the stitches was very disappointed to discover he had only received four stitches. He claims he deserved at least ten.

But four stitches it was, and after some strong encouragement to keep away from knives we were free to go home.

Where I finally was able to finish my show.

And he ate that bagel.